I completely forgot about the Council of Fashion Designer of America (CFDA) until my half-listening to Wendy Williams caught her going off about Beyoncé’s Givenchy suit — she wasn’t a fan. Queen Bey was crowned the CFDA Fashion Icon and according to Vogue, many were speculating that Michelle Obama would get the honors this being her last year as First Lady and all, but the honor went to Beyoncé and she took to the stage in a bejeweled pinstripe Givenchy suit and a wide-brimmed hat. (Is it me, or is she really into wide-brimmed hats and Givenchy lately?) Before we get to the suit, let’s talk about her speech.

Her speech was, in my opinion,  an eloquent “How ya like me now” to all the high-end designers that shunned Destiny’s Child back in the day, and wouldn’t dress them for high-profile events. Her mother (Tina Knowles) and her uncle made their outfits, and she made sure the audience was in on the fact that without their struggles, sacrifices, and determination, she wouldn’t be where she is today professionally and fashionably.

Beyoncé’s grandmother was a seamstress and fashion is in her blood. It would be interesting to see her actually design a line. I know she co-designed House of Deréon with her mom in 2004,  and she sells Miss Tina by Tina Knowles at Walmart, but I would love to see Beyoncé pull a Victoria Beckham. 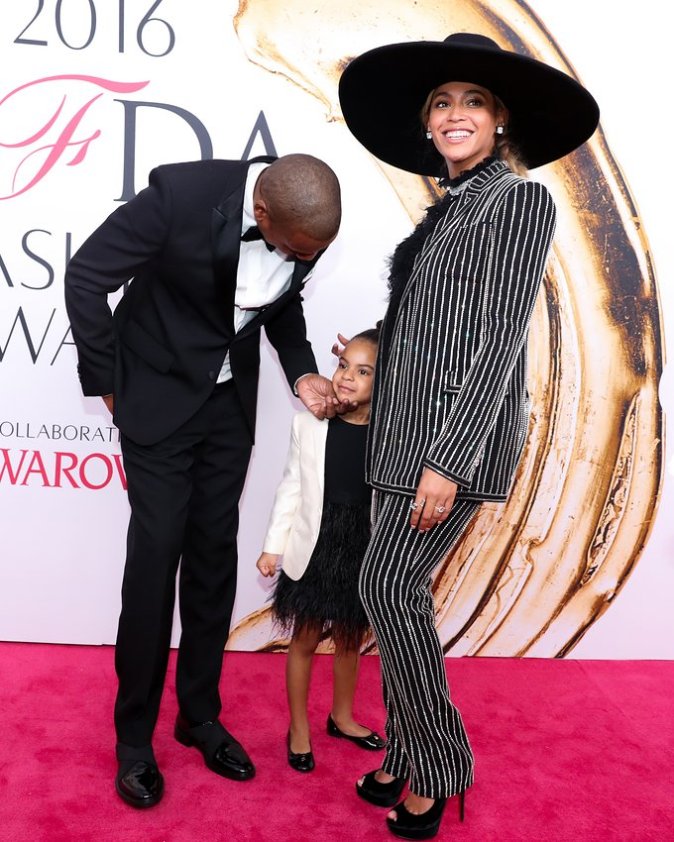 The Carter’s in Givenchy – Image via Vogue.

Was Givenchy one of the fashion houses that rejected Destiny’s Child? If so, this would be a serious case of turn the other cheek. Riccardo Tisci, the creative director for Givenchy has dressed Beyoncé for a while; the majority of her Met Gala appearances are courtesy of Givenchy, and the rest of the Carter’s (Blue Ivy and Jay Z) were dressed in Givenchy at the CFDA event. And while they can afford it, I doubt she pays anything when “rocking her Givenchy dress,” so all I can say is “My, how things have changed.”