I know, I’m a bad mommy. I have been focusing on passing a writing internship and my blog has severely suffered. Now that I have accomplished that task — proud author at Inquisitr News — I can breathe and let my mind wonder about such things as beauty product reviews, red carpet looks, and baffling trends.

There were many things going on that I wanted to write about — skin lightening, lampshading, and those trying to have it all no matter who is inconvenienced — but the news that Naja just released a lingerie line that understands that the traditional nude tone does not fit all peaked my interest. I too believe that “Nude” is a matter of perspective.

Soon New York subways will help promote Naja’s #NudeForAll diversity campaign featuring real women with varying body types and occupations wearing the LA-based lingerie brand’s multi-toned underwear. Up until now, nude underwear was a one-size-fits-all affair and everybody had the choice of the standard nude hue, black or white.

This is what we think of the old way of looking at Nudes. #NudeForAll photo credit: @scottnathanphoto @badgerandwinters

Catalina Girald, Naja’s CEO and creative director and a Stanford business graduate, got the idea to produce a wider variety of nude tones after she noticed how the nude ankle wraps Olympic gymnast Gabby Douglas wore drastically differed from her skin tone.

One of the reasons other brands have not stepped up to the plate is because of limitations. Girald’s business savvy and connections have allowed her to bypass order minimums that prevent other brands from producing a wider range of nude tones. It’s an innovation that is desperately needed. A company statement explains:

“Naja’s super-fast supply chain can produce in one month instead of 12 months, with minimum order quantities at 200 units per style instead of 10,000.” 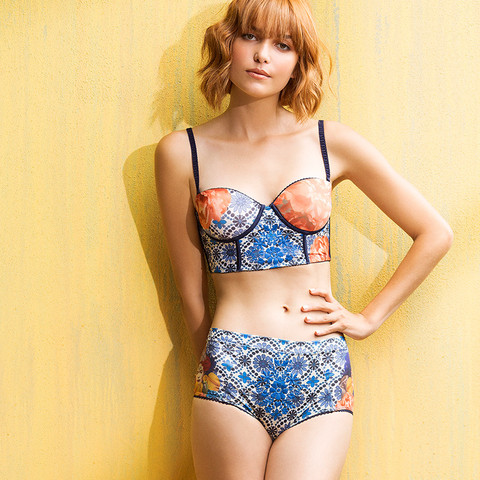 Naja was developed by Girald in 2013, and actress Gina Rodriguez (Jane the Virgin) joined in 2015, and they have built a company that empowers women, and is socially and environmentally conscious. One of their passions is helping women in Latin American countries support their families by paying them fair wages for sewing the lingerie bags the bras arrive in. Health benefits and education stipends for their children are also included. Also, Naja has an eco-friendly collection made from recycled plastic bottles.

The brand has paired each of its colors with a major makeup brand’s foundation shade to determine which nude shade is best; foundation colors from Nars, Bobby Brown, Mac, and L’Oreal are listed. The collection includes three styles of underwear, in sizes XS to XXL, and one memory foam cup underwire bra, in sizes 32 to 40 and cups A to DDD. The bra sells for $39 and the underwear range from $15 to $18, and the plan is to introduce more styles and colors in the future.

The result is a high-quality product that is made with hand-harvested Peruvian cotton, bonded and seamless bra straps, and breathable memory foam cups, that are nestled inside varying colors and unexpected prints that are stylish and trendy.

The Nude For All campaign can be seen online and at the Bedford L stop in Williamsburg, Brooklyn, and the collection will be available May 30.