I was a fan of Azature Pogosian’s black diamond jewelry long before Kelly Osborne wore his super-expensive nail polish to the 2012 Emmy’s and then had to defend wearing the ultra expensive manicure to her haters, as if they wouldn’t wear it if they had the chance. That lone bottle of black diamond nail polish is $250,000 and on display at Selfridges still waiting on a buyer. I am so excited that he decided to take away a few zeros and bring black diamond luxury to the masses with the “Black Diamond Collection” of nail polishes.

Azature is a Los Angeles luxury jewelry designer that specializes in black diamonds and the handsome provacateur has boutiques scattered around the U.S., Paris, London,Riyadh, and Moscow. The Kelly Osbourne stunt was genius really, and a great way to transition further into the beauty and fashion niche really especially since Azature studied fashion at Parsons School of Design. What better way to introduce yourself to consumers who have never heard of you then making sure they hear of you? 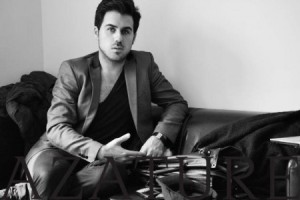 I mentioned this collection last month, and I am going to get my hands on the blue, black, green, and red shades from the Black Diamond Collection. I have paid more (Chanel had this iridescent blue shade about 10 years ago that was around $30, and I bought two)  for nail polish, so why not? At $25 a bottle I think it will make one hell of a manicure, and a great excuse to get out of housework. If you want a reason to be a diva, pick up a bottle or two at Selfridges, Harvey Nichols Saudi Arabia, Ron Robinson, Ron Herman Japan and Kitson.